Method of forming Manufacturing pipes by spiral method is another standard technic for producing pipes in the world. By this method, the plate is formed as pipes by passing from a series of rollers with spiral seams). In contrast to the direct seamed pipes in which the pipe diameter depends on the width of the plate, in this method, the pipe diameter changes by changing the primary feeding angle of the plate. By changing the feeding angle, pipes are produced with different diameters, while all the molds in the production line should be changed for the method regarding the direct seam. Thus pipes with different diameters can be manufactured with lower costs in this method of production as compared to the direct seamed pipes. Spiral pipes are produced by one-stage and two-stage methods. Spiral pipes by one-stage technic This method is one of the most popular methods of pipe manufacturing in the world and it is the preliminary form of producing spiral pipes. The production process in this method includes preparation of the plate, forming the plate, and internal and external submerged arc welding. In the preparation stage, the ends of the plates are welded together, and the edge of the plates are chamfered and grinded. If the formation is done properly, the edges of the plate should be pre-bent to prevent uncompressible protrusions. To weld the spiral seam, the internal seam is first welded in 6-o’clock position by the submerged arc welding machine. The external weld pass is also done in 12 o’clock position. Adjusting the welding torch is done automatically. After welding the seam, the pipe is cut and transferred then to the next stages. Production speed in this method is based on submerged arch welding speed. The submerged arc welding speed is about 1-2.5 m/min., and it may sometimes increase to 3 m/min. Since the speed of submerged arc welding is limited, the speed of production in this method is rather slow. Spiral pipes by two-stage technic Producing the two-stage spiral pipe is similar to that with one stage, but the difference is that in this method, the seam is welded by GMAW. This weld forms the root pass.in the next stages, the seam is filled from inside and outside by some submerged arc welding machines. This process has four main stages: 1- preparation of the plate, 2- forming the plate, 3- welding by GMAW, and 4- internal and external submerged arc welding. in addition to having high efficiency (due to fast formation), there is a technical advantage in the two-stage method, due to separated forming and final welding stages from each other. During forming in the forming station, the root base id welded by GMAW. The speed of this equipment that uses the carbon dioxide protection system is about 12 m/min. this type of welding is done in the 6 o’clock position. 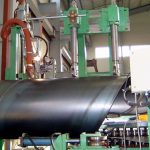 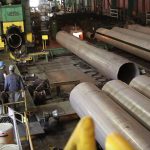 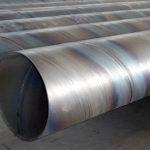 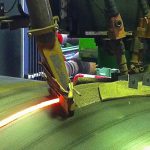 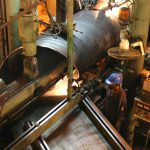